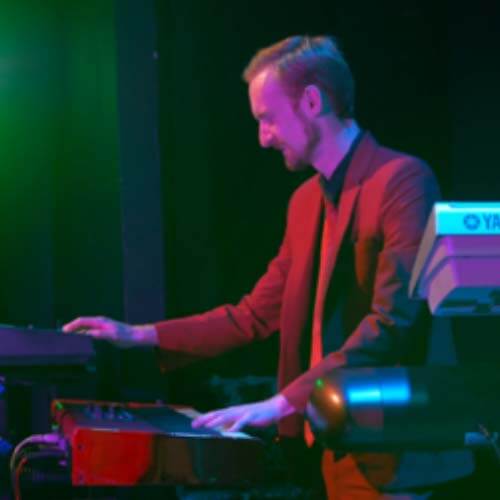 Harry Garbutt previously played Keyboards and is the Musical Director of ‘Faith – The George Michael Legacy’ , ‘Lost in Music – One Night at the Disco’ UK Tours, Bandeoke Experience UK and the FastLove UK Tour.

Harry is currently the Band Manager, Musical Director and Keyboardist of the 9-piece Function Band Central Avenue who are regularly playing corporate events and functions across the UK.

Harry graduated in 2018 from the Academy of Contemporary Music in Guildford with a First Class Bachelor of Honours Degree in Music Industry Practice, Keyboards, where he studied under Jono McNeil (The Voice), Brian Henry (Soul II Soul, Chaka Khan) and Mark Taylor (Elton John, Lady Gaga).

Harry has professionally managed a variety of different UK bands such as the Jazz/Funk/Soul band, Capacity, based in Leeds who toured the pub, club, wedding and corporate circuit regularly for 4 years playing more than 150 gigs in that period. They supported the 80s sensation Shakatak, The Tom Gee Band and have played with Richard Ormrod and Dread Supreme.

He has also played keyboards and worked as the Musical Director in many original and cover band projects in genres such as pop, folk, ska, lounge pop, jazz, funk, soul and rock, both live and in a studio environment.

Harry has developed a competent playing style experimenting with Piano, Fender Rhodes, Hammond Organ and Synthesizer sounds across a diverse variety of genres. He was classically trained for the first ten years of his career and has completed Associated Board of the Royal Schools of Music Grades.

Harry played with the Garforth Jazz Rock Big Band for 4 years playing festivals with The Skatalites, Ruby Turner, The Wonder Stuff and The Brand New Heavies. He has also taken part in solo piano projects, Jazz Trios and various musical productions such as Return to the Forbidden Planet. He has recently played in the Academy of Contemporary Music House Band.

Harry has recently been working professionally with Brian Henry with the British Neo-Soul and R&B band Soul II Soul. He has been working as keyboard technical assistant for Brian at the UK Lets Rock 80s Festivals with artists such as the Human League and Matt Bianco. He has also worked with Soul Purpose with Katie Hector (Incognito, Omar and Jocelyn Brown). He is working regularly as Brian’s technical support in popular clubs and music venues around London and across the UK. He is supporting Brian Henry as keyboard technical assistant on the 2018 Lets Rock Retro Festivals on 12 dates around the UK.