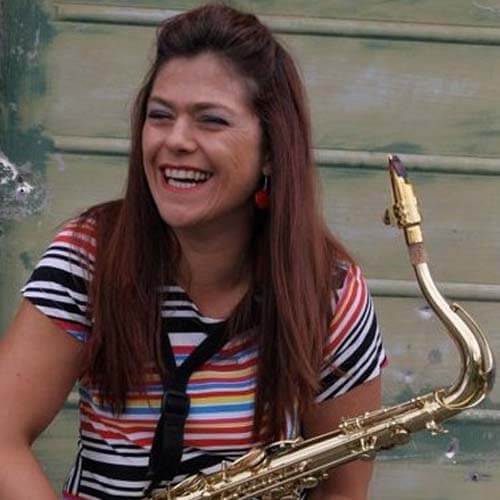 In 1984, a 10 year old Marie was listening to the radio, when her ears were graced with a sound she had not heard before. Careless Whisper had just been released. The opening sax solo held her captivated, and from that moment her career path was set.

She studied the clarinet at school and at University as well as studied with major performers such as David Campbell (BBC clarinettist and the man behind the 1992 Rhapsody in Blue Galaxy advert). At the outset of her playing career Marie was a classical clarinettist working with orchestras such as the English Symphony Orchestra. However she soon hit the theatre and session work circuit and her sax playing began to take over. She was a founder member of the successful UK Pink Floyd Experience, as well as being a part of many other shows, also retaining her love of classical music, and playing with the classically based Quartette Lunoire. She also plays with the saxophone duo Saximised, and is equally happy on a vast theatre stage or in a small intimate concert venue.

Marie is an examiner for Trinity College London, and teaches peripatetic music for several schools. She is also something of an academic and psychologist, and will be completely her PhD in 2022, with an particular interest in how music affects the brain and how this can be used to support holistic interventions and therapies.