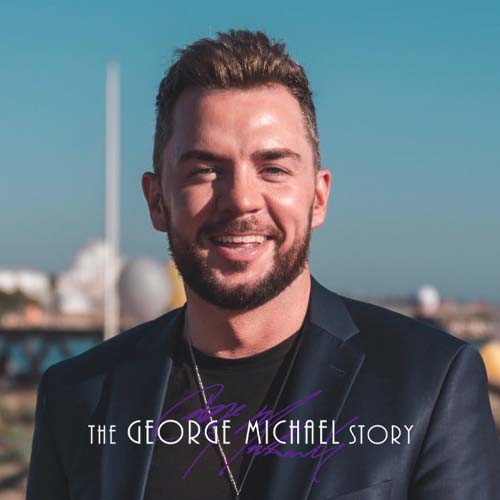 I started my tribute to the late legend Mr George Michael in 2011, originally performing abroad in the 5 star hotel resorts on the Greek Islands of Corfu, Zante, Rhodes, and Cyprus, born in 1984 with 2 older sibling I grew up immersed in 80’s music & immediately I took a liking to the fun upbeat hits of Wham!

This evolved over time into becoming a huge George Michael & Wham fan and from there on I never stopped following George and his music. Ive literally grown up listening to him and his music has played a huge part of my life.

George has always been my personal musical idol and my favourite male artist of all time, I feel a real connection with him on a personal level, I could relate to him in many ways, he made me believe it’s ok to be who you are, and to be proud of that, George Michael has always been very inspirational to me, and blew me away with his beautiful soulful voice and his emotional poetic lyrics. George was the only artist that I have ever wanted to tribute, as he was reason I started singing when I was 15 years old.

The first song I ever performed was Kissing a fool, one of my absolute favourite songs , I used to sing it about my first love as a teenager, my first experience of heartbreak as the lyrics really resonated with me at that time and that’s how I got into to singing George Michael’s music.

I’ve received wonderful feedback and praise since I started performing as George, many have said I sound very much like George, I do him real justice and carry the same soul, depth and emotion in my voice that’s he has, & that I have his moves down brilliantly, a real likeness both in voice and in movement and character, I loved his iconic 80’s faith look, that was the album I was most into growing up, so when I’m on stage I use the iconic “Faith” image, and the more sophisticated smart looks for parts of my show, I also sing all the Wham classic hits aswell.

I have built my reputation as a premier leading George Michael an Wham tribute artist in the U.K, by working hard to build up a credible reputation and following. I have been toured the UK and abroad from November 2018 with the theatre productions “Faith the GM legacy” & Fastlove shows. The shows have been unbelievably well received here in the UK and internationally, the feedback I’ve have received has been phenomenal an very heart warming and humbling as this is my main passion, music an performing is everything to me so I’m over the moon to hear such amazing feedback.

George Michael was my idol, my hero, and the reason I started to sing, his music has saved me many times, and still does to this day, many people who have watched my show who have seen George Michael many times have said to me I’ve done him proud and with real justice, that’s all I can ever ask for..

I love what I do and it’s an honour to be part of keeping this inspirational man’s music and memory alive. George will live on forever through his music in the hearts of his dear fans and I am proud to call myself one of his biggest..